One of my most important projects connected with this blog is to provide educators and citizens who volunteer as "Defenders of Public Education" with regular email notices of pending legislative and BESE actions so that our volunteers can communicate more effectively with their representatives at the legislature and to BESE members. If you have not yet signed up for my special email notices, I hope you will do so right away. All you have to do is send me an email at louisianaeducator@gmail.com and include your name, your preferred email address, your cell phone #(optional), and your home zip code. The reason I need your home zip code is so that I can place you in your correct legislative districts for both Senator and Representative. This is critical because sometimes we will target our messages to particular legislators.


The Latest Legislative Report Card From the LAE

The first thing you need to know if you intend to communicate more effectively with your legislators is their voting record in relation to education issues. One of the best assessments of voting records I have found is at the Louisiana Association of Educators website. If you just go to the LAE website, you can download a chart showing how all Louisiana legislators voted in the 2013 legislative session on key issues affecting public education and public educators. Just check to see how your State Senator and State Representative voted on those key issues.

Here is the press release that was issued last month by the LAE concerning their most recent legislative report card:

Legislator Evaluation Mechanism Measures Lawmakers Based on Their Support for Public Schools
BATON ROUGE, LA – August 16, 2013 – The Louisiana Association of Educators’ political action committee, the LAE Fund for Children & Public Education (LAE-FCPE), released its 2013 Legislator Report Card Friday. The committee distributes the evaluation mechanism in order to share information surrounding lawmakers’ positions on legislation that reflects annual legislative priorities in education.
“This report card is more than just a list of grades given to each legislator," explained LAE-FCPE Chair Debbie Meaux. “It offers an in-depth look at how each legislator voted on the issues that matter most to the public education community.”
The LAE’s legislative goals are identified at the beginning of each session and are approved by the Association’s membership at its annual convention. The LAE Lobby Team uses these priorities to evaluate legislators throughout the session. Legislators are given a “vote score” based on their voting record surrounding education legislation; the Lobby Team also scores each legislator on additional criteria including bill sponsorships, back-home access, education advocacy, behind-the-scenes advocacy, committee votes, legislative contact team ratings, and education champion points. Points earned or lost by a legislator on these criteria are combined with each lawmaker’s vote score in order to calculate a total score. A final annual score is calculated by taking a composite of the current and previous years’ scores.
The information gathered through the report card evaluation process is used to make judgments on LAE-FCPE campaign support, contributions, and candidate endorsements. Meaux said this tool serves as a one-stop source of information that helps association members make informed decisions during election season.
“It is critical that our members stay up to speed on the decisions made by their elected officials during annual legislative sessions,” she said. “Compiling and distributing this important resource to our members helps us fulfill our commitment to being strong education advocates; not only for association members, but for every public school employee and student in Louisiana.”
To view and download the complete 2013 LAE-FCPE Legislator Report Card, please go to http://www.lae.org/.

Do the highest performing schools in the state have more Highly Effective - and less Ineffective - teachers than the average? No, says State Superintendent John White. 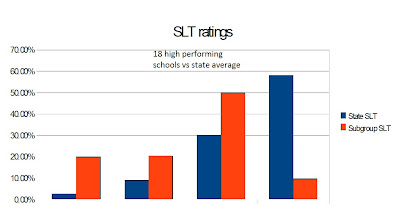 Thursday, eighteen high-performing schools were recognized for awarding low numbers of the highest ratings to teachers. Each school ranked in the top ten percent of either student proficiency or improvement in proficiency rate on state assessments.


According to the Compass Report on teacher evaluations, statewide, over half the teachers were rated Highly Effective for student growth as measured against their Student Learning Targets. However, in these 18 schools, less than ten percent of teachers received that rating. They also rated teachers as Ineffective at over four times the state average.


Student Learning Targets (SLTs) are goals set for students by teachers and principals at the beginning of the year. Teachers are evaluated by how well their students attain those goals.

“These schools show the great results that can be achieved when educators have high expectations for the students they teach,” said State Superintendent John White. “By raising the bar for what children are expected to achieve academically, educators raised the bar for what they could achieve professionally, which is the goal of Compass.”


Educator Herb Bassett questions White's logic. According to Bassett, the ratings failed  to reward teachers in several schools for high achievements and White praises a policy of failing teachers by design. "Common sense dictates that these schools' high performance should be reflected in high ratings for their teachers. Instead, the Superintendent celebrates a tainted process where teacher ratings are much lower than student achievement warrants. The data raises red flags about the fairness and reliability of these ratings."


Clark Prep, along with Samuel J. Green Charter School, Arthur Ashe Charter School, and John Dibert Community School were schools praised by White. In these schools, 70, 68, 54, and 35 percent respectively, of teachers were given the rating of Ineffective on their SLTs. The state average was less than three percent.

All four schools are run by Frontline (Charter) Schools in New Orleans.


In the Compass teacher evaluation system, two components are averaged to yield a final rating. The Professional Practices Score is based on two principal observations during the year. The Student Outcomes Score is based on student achievement as measured against either SLTs or student growth targets set by LDOE's Value-added Assessment Model (VAM).


In the VAM system, teachers are ranked by a computer model, and assigned labels based on quotas set by LDOE. Within each content area, the bottom ten percent are ranked Ineffective and the top twenty percent Highly Effective. Less than a third of teachers are evaluated by the computer model.


The Compass Report calls for "alignment" of ratings by the different measures. Evaluators are being encouraged by the DOE to adjust future ratings to match the quotas set in the VAM system. This blog pointed out in our post last week that such a practice would not be in accord with Act 54.


There are stark contradictions between the state's VAM computer model results and Frontline Schools ratings. Since SLTs and VAM rankings measure student growth in different ways, the discrepancies call into question the reliability of the two measures.


At Arthur Ashe Charter School the computer model ranked 77 percent of the teachers Highly Effective and 23 percent Proficient. No VAM teacher received a lower rating. However, 54 percent of all teachers at that school were rated Ineffective on their SLTs. 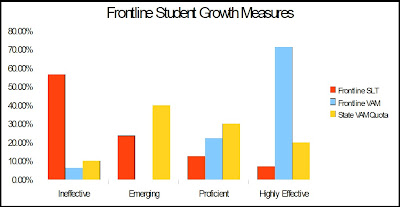 
These schools held up a questionable standard for the Professional Practices Scores. No principal awarded any teacher a rating of Highly Effective based on the classroom observations.


Overall, the VAM system ranked 71 percent of these teachers Highly Effective; but the SLTs yielded only seven percent Highly Effective, and by the principal observations, no teacher was Highly Effective. The disparity between the VAM rankings and the other measures show possible collusion among these principals to withhold the highest ratings from their teachers.


"If these schools truly are among the state's top performing schools, it makes no sense to put over one third of their teachers on a fast track to being fired," Bassett commented. "White chose to praise rather than condemn the evaluations of these teachers."
11 comments: Posted by Michael Deshotels