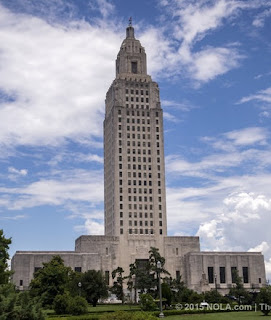 This story in The Advocate describes some of the House Education Committee actions yesterday, killing several bills designed to curb abuses by charters. Charter school administrators descended on the Education Committee in force Wednesday while the administrators and teachers in the real public schools were teaching children. The charter advocates are a highly effective special interest group because they are backed up by big business in Louisiana and nationwide who are determined to privatize education as much as possible. In my opinion these folks have no respect for public schools or professional educators. They just see public education as a way to make money off of children.

As part of their strategy, charter advocates funnel huge amounts of political contributions to legislators and BESE members to insure that no legislation will pass to limit their growth and profits. So when legislators vote against reasonable bills to prevent charter abuses, it is the political contributions they received or expect to receive that are controlling the voting. If you are a supporter of public education, you need to know who voted against you repeatedly this week. I will provide that later.

Here is the testimony I gave to the House Education Committee in favor of HB 98, that would delete a provision in the 2012 Jindal legislation that allows BESE to approve independent charter school authorizers. Those authorizers could approve many new charter schools over the objection of our elected school boards.


Testimony on HB 98
Good morning. My name is Michael Deshotels and I live in Zachary. I do education research and write a blog on education for educators and parents.

I am here in support of HB 98, because we need to correct an error that was made in 2012 when the legislature rushed to try everything that they thought would improve public education in Louisiana. This part of the legislation was a mistake because it can take away our right to run our public schools through our elected school boards.
Most citizens believe in local control of our government services. It is wiser to have our schools run by our local school boards than by unelected groups or even by BESE. In addition, my research shows that it is also more effective to have our schools managed by our local school boards.

At one time it was thought that if low performing schools were taken over by BESE and given to charter school operators, that their student performance would improve over their performance in school board operated schools. That has now been proven to be wrong! All of my research shows that the schools operated by BESE approved charters generally do a poorer job.  All but one of the takeover schools in the Baton Rouge area, have been total failures. They have done so poorly that parents pulled their children out and some schools had to be shut down for lack of support. My research shows that the takeover schools in New Orleans still do not do as good a job of educating low-income students as do our local school boards across the state.
This experiment with our children has failed! It would be mistake therefore to allow new groups that are independent of the taxpayers to approve more charters.

It is a well-known fact that big contributors from outside Louisiana are the ones pushing for these new charters. Those contributors are the Waltons, the Broads from California (not spelled with an x), the Gates foundation from Washington state and Mike Bloomberg from New York. These big donors are the primary financiers of our present BESE elections and they are the primary financiers for New Schools for Baton Rouge, one of the groups that wants to be a charter authorizer. But to add insult to injury, these donors are not contributing money to help our public schools. They are donating millions to get politicians elected to privatize our schools and to use our tax money to do it with.
It is a serious error to say that that MFP money for each child belongs to the parent and that they should be able to take it to any school they choose. Citizens who have no children in public schools pay most of the MFP allocation and we are happy to do it. We deserve the right to choose how our schools will be run through our elected school boards. Please vote for this bill.
Thank you

No comments: Posted by Michael Deshotels

NOLA.com Editorial Supporting Charters Could Not be More Wrong!

This is a recent editorial by the New Orleans electronic newspaper, nola.com which once again touts the virtues of charter schools in Louisiana and opposes any effort by the Legislature to curtail abuses and add safeguards and more oversight by elected school boards to prevent abuses. The article is based on a major misconception by most of the news media about student performance and the mistaken assumption that our schools can somehow get all students to perform at average or above levels. This big misconception has served as a basis for many reforms that are more destructive than helpful to our public schools. I am reprinting the comment I submitted to that editorial:

Now it is also well known by education researchers that the lowest performing students are those that come from high poverty neighborhoods. This lower performance has nothing to do with the quality of the school they attend nor the ability and dedication of the teachers at those schools. To label schools as "failing schools" just because they happen to serve more at-risk students than other schools is a terrible injustice to the schools, the teachers and even the students of the schools serving high poverty students.

Also, to claim that charter schools are needed because they are the new thing, or because the state has many so called "failing schools" is a huge mistake. The negative results of the charter system implemented in Louisiana far outweigh the positives. Just the loss of nearly 7,000 dedicated teachers, mostly African American, who were fired in New Orleans to allow charter operators to hire low cost neophyte teachers so that they could make more profit for their highly paid managers, was a travesty that did not improve the future for the children served. The latest results for the economically at-risk population of the New Orleans Recovery District schools show them to still be performing below the state average for comparable students. The increased opportunities for graft, corruption and test cheating by charter school operators are definitely not justified by these below average results.
Michael Deshotels, editor: The Louisiana Educator