The new Federal Every Student Succeeds (ESSA) which is replacing the failed No Child Left Behind law requires that each state submit an accountability plan to implement the new federal law.

Last week, BESE ignored the requests of most local superintendents and about 96% of the school principals and tentatively approved an accountability plan submitted by John White with some adjustments on a motion by BESE member Holly Boffy.

Only in Lake Wobegon are all students above average
I pointed out in my 3 minute presentation to BESE that the plan, even as amended, is seriously flawed. It will fail because it is based on the false premise that all students, no matter what their poverty level. no matter their cognitive and other disabilities can all achieve mastery on the state tests. Sure, there are fudge factors in the plan that are supposed to make allowances for low performing students, by allowing extra points for students who improve above their predicted VAM score. But in the end they are all supposed to end up performing above average. Not Possible!

This blog has provided readers with much evidence that demonstrates that the state test results are subject to manipulation to produce whatever results White and his testing company want. But that does not fool the outside observers who don't give credibility to Louisiana's inflated LEAP tests and end of course tests.

The proposed ESSA plan is in violation of state law which requires our state tests to be comparable in rigor to NAEP.
State law requires that our Louisiana state tests must be equivalent in rigor to national tests including the NAEP tests. John White has repeatedly claimed that our state tests are designed to be equivalent to NAEP, but the data shows something quite different. White claims that the performance of our students on LEAP at the Mastery level (level 4) or above is set by our testing company to be equivalent to the proficient level or above on NAEP. Here are the latest comparisons of Louisiana LEAP results to NAEP: (Click on the chart to enlarge it) 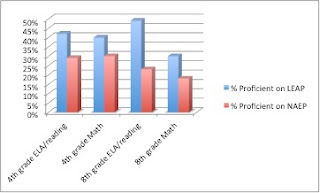 In all cases, Louisiana's LEAP results are highly inflated compared to the latest NAEP results.
But to make things worse, the LEAP results have been increasingly inflated in recent years.

Inflation of our state test results will not fool anyone in the long run, because NAEP is the real standard for state comparisons.
In 2003 our students were rated as preforming better on NAEP than on the LEAP test. By 2016, the results for LEAP had zoomed to a level much higher than the Louisiana results on the most recent NAEP test.

It is true that Louisiana students have improved on all parts of the NAEP since 2003, but this improvement is not dramatic considering all the resources and emphasis Louisiana has put into the incessant testing of students. Meanwhile, our school curriculum has been deformed, reducing the emphasis on other non-high stakes subjects. Vital instruction in health/physical education, social studies, the arts, music, and vocational education have been sacrificed so that students can spend more time in rehearsal for math and English tests. Our students are now less active, less healthy, and more obese than students a generation ago, yet our schools are doing nothing to address their real needs. Vocational education in high school has been decimated just at the time Louisiana industry is facing a  severe shortage of skilled workers for many high paying jobs. Louisiana is in the process of importing workers for the construction industry, for high paying plant jobs, and even the health care industry. Many of our current graduates seem to be prepared mostly for working at McDonald's and Popeye's.

I'll be honest and admit that I don't really understand the complex system White is proposing for calculating the school performance scores under the new ESSA plan. I rely on my friend and technical expert, Herb Bassett, to explain it to me. But since the plan is in flux based on the most recent actions of BESE, and may change more, no one really knows where this is heading.

LABI is apparently determined to trash our public school system
I do know one thing for sure. If Louisiana students are expected to perform at the mastery level on NAEP, many more of our schools will receive unreasonably low grades. John White is the fair haired boy of the Louisiana Association of Business and Industry (LABI). White and LABI are pushing hard for further ratcheting up the highly punitive system of grading our schools and our educators. What is the purpose of such harsh ratings for our schools? Will these ratings encourage business and industry to come to Louisiana?

We don't blame our doctors and hospitals if obese patients with diabetes refuse to diet and exercise, but we blame our teachers and schools if our underprivileged students don't excel in school.
We don't blame our doctors and hospitals because Louisiana has one of the highest rates of diabetes and heart disease in the nation. If an obese patient refuses to lose weight and exercise, we don't blame his doctor, but we do insist on blaming teachers who teach our most at-risk students because those students don't perform at an above average level.

California does no better than Louisiana on national tests.
Just to demonstrate how unimportant these score comparisons really are for success of a state economy,  consider the fact that probably the most successful state economy is that of  California, whose students score at about the same level as Louisiana on national testing. That's not because their schools are bad. It's because they have just about the same proportion of high poverty and at-risk students as Louisiana. Their ranking on national tests has apparently no effect on the success of their economy.

California has a great economy for many reasons including the development of high tech companies and because the state has great natural resources which they know how to utilize. Louisiana has great natural resources because of the oil and chemical industries, yet our educational system fails to take advantage of this by preparing our students for jobs in the industries that are expanding in our state.  Our educational system has shifted emphasis away from career and vocational education just at the time that our industries have the greatest need for skilled workers. So why is LABI so determined to trash our educational system and blame it for the problems of our state? Their entire campaign is based on the false assumption that our teachers are lazy and incompetent. Nothing could be further from the truth.

The Louisiana education system could become a winner if we focused on our strengths instead of our weaknesses.
Louisiana will continue to be seen as a loser if we insist on comparing ourselves with other states that have more favorable demographics. We will always be seen as failures if our educational system continues to be skewed too much towards college prep and not enough toward practical education and high tech job training. What we are doing under the rule of John White and LABI is insanity! When will Louisiana take back its public education system from the clutches of non-educator reformers.

One thing you can and should do: Ask your State Senator to vote against the renewal of John White's contract, and insist that a real local educator be appointed.
1 comment: Posted by Michael Deshotels