State Superintendent of Education Pastorek, New Orleans Recovery District Superintendent Vallas, and others made a presentation recently to a joint meeting of the House and Senate Education Committees on the progress of Louisiana's Recovery Districts. As if to emphasize the dramatic improvements of student performance in the schools taken over by the State Department, the report was titled “Louisiana's Turnaround Zone”. It seems that the State Department of Education is attempting to introduce a new catch phrase that may reenforce the impression that dramatic progress has been made by the schools taken over by the Recovery District.

The State Department of Education also produced a chart showing gains in percentage of students in the New Orleans Recovery district scoring basic or above on LEAP English/Language Arts and Math tests, but there was no comparison of how the students in that district are doing compared to all other Louisiana students. The following is such a comparison with state average performance and also with the performance of all other students statewide with demographics similar to the students in the New Orleans Recovery District. (Click on image to enlarge it) 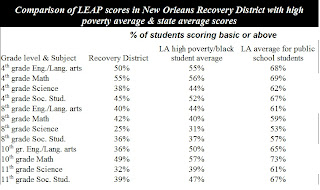 Finally, no comparison was made between schools recently taken over by the state Recovery District in other parts of the state and the performance of the schools before takeover. The following is such a comparison: (Click on image to enlarge) 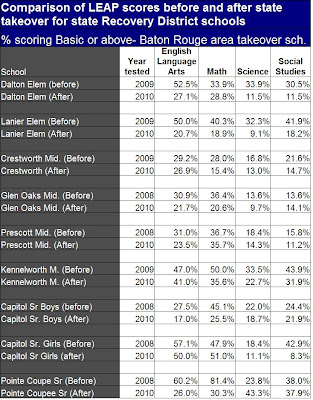 It seems premature to classify either of the Recovery Districts as 'Turnaround Zones'.

Dispite the data to the contrary, the State Department continues to encourage the myth that the Dept. of Education and its favored charter schools can take over and correct poor student perfomance.  A recent Baton Rouge Advocate story describes a report made to the City of Baker School Board by representives of the State Department of Education. In this report the school board was warned that its schools were performing so poorly that all of them would be in danger of state takeover next year when the minimum acceptable school performance score goes to 75. The Dept. representatives informed the school board that student scores in two of the schools were so poor that the Department had determined that "potentialy half of the teachers in those schools were doing more harm than good." The Dept. representatives suggested that the school board should consider "personnel changes" in those schools. In addition to being insulting to the teachers and administrators of the two schools this assumption is obviously inaccurate and unfair. When we compared the student scores at the two Baker schools with Recovery District schools in the Baton Rouge area, the Baker schools far outperformed the takeover schools. Are the teachers in the takeover schools going to be informed by the State Department that they are doing "more harm than good" to their students?

Baker schools Superintendent, Ulysses Joseph, has expressed concern that the State Dept. report itself is damaging to the Baker school system. He said: "How can we expect parents to send their children to school and encourage them to participate in school when the State Department has announced that some of our teachers are doing more harm than good?"

This Baker schools incident is just a taste of what is to come as the State Department begins to apply the new value added model of teacher evaluation throughout the state. Somehow, without observing the Baker classrooms, the State Dept. representatives were able to determine that half the teachers were doing more harm than good and that the school board needed to make "personnel changes".
5 comments: Posted by Michael Deshotels

Guidance Counselors Have A Tough Job

According to an article this week in the Baton Rouge Advocate, a BESE task force is attempting to insure that school guidance counselors have the opportunity to devote the time necessary to do their job of guiding and counseling students and thereby improving the graduation rate. The point was made that many of our guidance counselors spend so much of their time doing “menial” jobs at the school such as sponsoring the prom, that they don't have time to help kids with career guidance and personal problems etc. What many people don't realize is that many teachers are expected to do “menial” jobs such as sponsoring dances and selling tickets at ball games after school hours. More emphasis is needed on the really important function of our schools which is to prepare students for the demanding job market facing today's young adults.

The point was made by professor Jennifer Curry from LSU that guidance counselors need to have time to help students make the connection between school and careers. Unfortunately, many counselors told us in response to a survey recently that many students have a big problem seeing the connection between the curriculum in our schools today and their potential careers. That's because most of what we offer students in high school today is not suited to their career needs. By spending so much of the schools' resources attempting to prepare all students for 4 year colleges we shortchange both the true college bound and non-college bound students. This one size fits all curriculum also causes many students to drop out of school.

Our guidance counselors could do a much better job of motivating students to work hard and succeed in school if they had something better in the curriculum to sell. For example, New Orleans and other urban areas have a serious shortage of skilled workers for everything from health care to auto mechanics, plumbers and electricians, yet the school system is still trying to prepare everyone for college. How has the public school system succeeded in this mission? The recent statistics tell us that only half of the students graduating from the Recovery District in New Orleans took the ACT test prior to graduating. Of those taking the test in that system, the average score was 15. That tells us that those students are not qualified for anything, much less college. Who can blame them for feeling let down by the school system when they go out looking for a job?

As I keep repeating in this blog, we seem to be obsessed with preparing students for the wrong future! We can keep patting ourselves on the back and pretending that our Core 4 curriculum is just what we need to restore value to the high school diploma, or we can face the fact that our students need other choices . Potential employers and industries thinking of locating in Louisiana want workers with job skills not just book knowledge.
1 comment: Posted by Michael Deshotels