As much as the authorities governing education would like to link school performance primarily to the effectiveness of educators, the statistics tell us otherwise. Just as educators have warned for years, the most important factor affecting school performance is poverty. Now you can see it in powerful numbers as calculated from Excel spreadsheets using data collected by the LA Dept. of Education. The data and accompanying chart includes data on every public school in the state that had an assigned SPS.

This analysis was created by using the student poverty data as measured by free and reduced lunches from each school compared to the school performance score of each school. A total of nine data points were created using the free and reduced lunch percentages for schools related to School Performance Scores. The average SPS using data for all schools with 10 to 19.9% students on free or reduced lunch was used to produce the first data point (There were no schools with less than 10% poverty students according to the data collected by the Dept. of Education).The next data point was produced using an average SPS for schools serving 20 to 29.9% poverty students and so on to 90 to 100% free or reduced lunch. The data below and the chart shows the relationship between poverty and average school performance score. The relationship is striking in its consistency. (Click on image to enlarge) 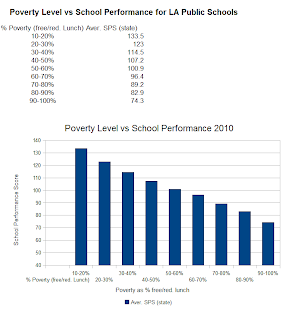 In addition, an analysis of individual schools within each poverty group, shows very few schools have SPS scores that differ greatly from the average SPS for their poverty group. For example: In the lowest poverty group, 10-19.9% free/reduced lunch, all schools scored above 120 SPS. In the 20-29.9% poverty group, only 6% scored below 100 SPS. At the other extreme, (90- 99.9 % free/reduced lunch) only 8% of the schools scored a 90 or above SPS.
The state and federal governments have mandated that all schools in Louisiana regardless of poverty factors are expected to reach an SPS of 120 by 2014. With only 3 years left and an average growth of 1.2 SPS points per year that has occurred since the beginning of this mandate, high poverty schools are placed at an impossible disadvantage. Louisiana has a huge majority of high poverty schools, placing the whole state at an extreme disadvantage.

The other unfair disadvantage is the newly adopted school grading scale. This fall the public and parents will be told by newspapers and by letters to parents that certain schools are performing very poorly, when all that is being determined is the level of poverty of the students attending. A school serving high poverty students may have an SPS score of 89 at the end of this school year, and have shown significant growth over the previous year, but if the school did not achieve its state mandated growth target, that school will be assigned a D-minus grade even though it is outperforming 90% of the schools in its poverty level.

One of my readers from another state sent me an email stating that "Blaming schools for the academic failure of poor children makes no more sense than blaming hospitals for the lung diseases of people who smoke cigarettes."

Another major factor affecting SPS scores is student selection by certain schools such as magnet schools or alternative schools. A magnet school may have truly top notch teachers but the most important factor affecting the SPS is the admittance of only students that have high aptitude and motivation. It is not fair for the grading system to compare them with general admittance schools. The opposite situation exists for alternative schools that primarily take students with academic or discipline problems. These schools will always be graded unfairly compared to regular or magnet schools.

The above analysis shows that there are certain dominant factors that far outweigh the influence of effective teachers in determining a school's SPS. My question then is: Why are professional educators in Louisiana allowing their schools and their own performance to be improperly reported to the public as poor or failing by this unfair school grading system?

I don't know of any way this new letter grading systems for schools could be made fair, but Senate Bill 35 in the upcoming legislative session by Senator Yvonne Dorsey would delay implementation of the letter grading system and require BESE to review and possibly revise the program. The results of the BESE reconsideration would have to be reported to the Education Committees of the Legislature before final adoption. I hope all persons interested in improving rather than damaging our public education system will contact their legislators and ask them to support this bill. Get the email address of your State Representative by clicking on the highlighted link, and your Senator at this link.
18 comments: Posted by Michael Deshotels