False Advertising: It is used to Steal Public School Taxes!

Take a look at the claims in this mailing that is being sent to public school parents right now encouraging students to apply for vouchers to the same private schools included in the Brookings study. 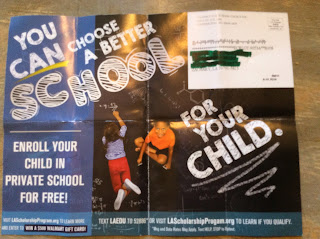 In Louisiana, the voucher program can pay for up to $5,300 per student to allow children to attend a participating private school. The majority of the voucher schools choosing to participate are parochial or religious schools. Previous reports have revealed that some of these schools could not remain open if they did not have a significant number of voucher students.

The vouchers (tuition scholarships) were sold to the Legislature originally as a way to allow low income students to escape failing public schools and to attend better schools. The definition in the law for a so called "failing school" in the voucher legislation was set at a rating of "C" or below. No one bothered to develop an initial rating system for the private schools that would be eligible to receive voucher students. Later, however, such schools may be barred from receiving additional voucher students if voucher test scores are rated as failing. But many voucher schools are not rated by this method because they have too few voucher students.

Based on the Brookings Institute study, the people sending out the advertisements shown above should be sued for false advertising! These mailings are paid for by the American Federation for Children Growth Fund.

The Brookings study determined that Louisiana was a good candidate for a study of relative performance of students in voucher schools because the participants are selected at random using a lottery system. This may prevent selection of the most capable students. Other researchers have pointed out however, that many parents of more motivated or capable students are self selected by the fact that they took the trouble to apply. Nevertheless, the study concludes that the students that are losers in the lottery are better off because they will continue to attend their public school where their performance is better than that of the voucher "winners"!

Some supporters of vouchers take the position that the MFP allocation somehow belongs to the parents of school children. Representative Nancy Landry of Lafayette has suggested that parents of public school students should be able to attach their MFP dollars to their child just like a backpack and send them to the school of their choice since it is their MFP money and it should be their right to choose the school their child will attend with those dollars. This assertion is simply not true and is also a form of false advertising!

It turns out that more than two thirds of the MFP is funded by taxpayers who do not have children in public K-12 schools. I am an example of one of those taxpayers. My question to Representative Landry and others is: "Why should a parent have the right to send my portion of the MFP (or the amount allocated to voucher students) to the private school of their choice where the student gets an inferior education? Suppose I don't agree with the religious views promoted in some of those schools. Why should my tax dollars go to support those religious views and to indoctrinate children?

Voucher school promotions are just one of the ways that Louisiana taxpayers are being bilked of our tax dollars using the bogus claims of school choice.

This article in The Advocate describes the effort to gain approval from BESE or from one of the new charter school authorizers for one or more BASIS Charter schools in the Baton Rouge area. The BASIS intrusion is being promoted by the group, New Schools for Baton Rouge.

The BASIS Charter school group started in Arizona and is looking to expand. This line: "We do not lower the bar" by the CEO of BASIS is both the secret of its apparent success and the reason for the destructive nature of such schools. While it claims to be an open enrollment school, its policies basically reject or fail any student who cannot meet its very stringent academic standards. Those rejected or failed students must then go back to the real public schools, resulting in downward pressure on performance in schools that are not allowed by law to select their students.  So for all practical purposes, BASIS schools are just glorified magnet schools that cater to high performing students. They don't have to provide better teaching to look good when they choose only the higher performing students.

BASIS Charter schools want to set up shop in any area that has a large pool of students of all kinds where they can attract only the highest performing students away from the real public schools. They hope also to attract high performing students away from private schools using the promise of a free "elite" education! They then ignore the need to serve students with handicaps or those who struggle in school, and the management company makes a profit using our tax dollars! What a sweet deal! That's why I have called such schools "predatory charters". Such schools can do serious damage to our public schools by skimming off the highest performers and thereby lowing the ratings of our real public schools and causing them to eventually lose public support. Such a trend will damage the entire school system because it will become harder and harder to maintain the school tax base and will result in loss of critical resources for all students.

I want my readers to be aware that the same executives that run New Schools for Baton Rouge are the leaders of recent efforts to take over and turn around the performance of several struggling schools in the Baton Rouge area. They have failed miserably in all these efforts, and have been forced to close school after failed school. So they have basically given up on turning around schools that serve the most at-risk students and they want to go after the high performers. This devious strategy is also a form of false advertising, because it is exactly in contradiction of the reason charter schools were authorized in Louisiana. In addition, it is a travesty to let some out-of-state moguls make a profit off of our children just when school funding is in danger of absorbing budget cuts.
No comments: Posted by Michael Deshotels