The recommendations of the hundred person committee for revising the Common Core standards were adopted Tuesday, June 7 by the joint legislative committee on education. (See also the Educate Louisiana post on this) Governor Edwards also approved the revised English and Math standards for Louisiana public schools soon afterwards. Everyone seemed to conclude that with so much effort and time expended by the revision committe, it was just necessary to end the controversy over standards and accept the revisions. There are certainly still major problems with the standards but I know that teachers and school administrators will do what they have always done; which is to provide children with the best learning experience they can create while satisfying the mandates of whatever standards are in effect.


I want to extend a special thank you to Ganey Arsement, Dr Beth Meyers, Leslie Truax, and Tiffany Guidry who testified in opposition to the revised standards. They pointed out serious deficiencies and omissions of the standards.

I believe however,  that the standards review committee headed by Dr. Regina Sanford of the St. Tammany Parish school system probably did the best job they could considering the short time frame allowed by the legislation.  The committees were also greatly handicapped by being required to work primarily from the Common Core standards, instead of being able to consider various sets of standards equally. Again, the impossibly short time frame mandated by the legislation made it difficult to use a more general approach. Another serious handicap was that the committee was not given an item analysis of the 2015 PARCC testing. Such an item analysis would have allowed the committees to see immediately which of the standards were causing the biggest problems in implementation and therefore needed extensive revisions or removal from the system.

I testified before the Joint Education Committee as part  of the public hearing and pointed out to legislators that the extremely low scores on the PARCC tests for Louisiana should have been considered as an indication that at least some if not many of the standards were inappropriate. The PARCC consortium saw fit to adopt extremely low cut scores on the test probably to prevent an outright revolt by the large number of parents whose children would have been deemed as failures if the cut scores were not drastically lowered. I gave the legislators a fact sheet pointing out that the passing score for 6th grade ELA had been set at 27% and the 8th grade math passing score was set at only 22%. Students could have passed in some cases by mostly guessing at the multiple choice portion of the tests. Something is seriously wrong with standards or the tests, or both, when the state average score on the 8th grade math test is only 27.5%. Here is a table showing the average scores by Louisiana students on each of the 2015 PARCC tests. 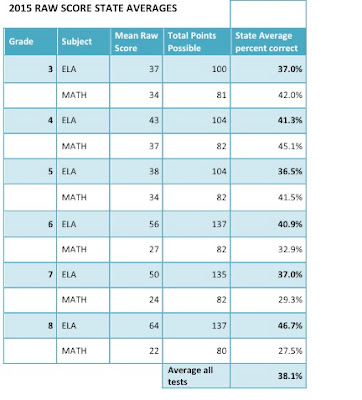 I ended up suggesting instead of a complete rejection of the proposed standards that the legislature keep open a mechanism for annual changes as some components of the standards were shown to be in need of revision. This is the recommendation that was made by Debbie Meaux, president of LAE.
In addition, I suggested that the LDOE be required to release the raw scores on all state tests each year so that teachers and parents could see how students actually performed instead of receiving only the scale scores, which in my opinion only serve to obscure student performance and allow the LDOE to secretly manipulate test results each year.