I want to thank the Louisiana Association of Educators and Senator Blade Morrish for passing a bill in the 2018 regular session that will finally report the actual performance of each student on each of their state tests. What the legislation does is provide the raw scores for each student on each test taken in Spring 2018 to their 2017-18 teacher and to the receiving teacher for the 2018-19 school year and for all future year tests. So the teachers and parents will finally be told how many points the student got right out of the total possible on each test in addition to the "fake" scale scores they have been getting so far.

Here is my point: A score of Mastery on the Algebra I test for LEAP 2025 is 750 scale points out of a possible total of 850. To the regular teacher or parent, that seems to be a pretty good score. But the real raw score equivalent to a scale score of 750 in Algebra I is 23 points out of possible 68 points or about 34%. Not so great. The official reason for the use of scale scores in reporting test results is that scale scores allow the comparison of various test forms that may contain a different number of difficult questions compared to easier questions. But it also allows possible manipulation of test results from year to year and obscures the actual performance of the student. For example, the official BESE policy for the lowest passing score on school work is 67%. Not at all the percentage for passing on state tests. This scale score system is confusing to say the least.

The following table was composed using my latest public records request for the conversion tables for raw score to scale score conversions. It gives teachers and parents a little advance information on the cut scores for each of the Spring 2018 LEAP tests for grades 3-8. (Click on the table to enlarge) 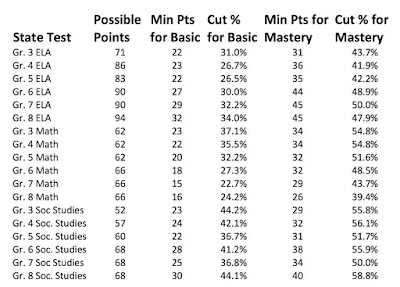 The following table lists the cut scores for high school End of Course tests for Spring 2018.
I need help from my readers who are informed on the most up-to-date requirements for satisfactory scores meeting graduation requirements. For example I am not sure which of the old standards (Fair, Good, etc) that are equivalent to the new (Basic, Mastery etc) ratings. If you have clarification on this please add a comment to this post. (I just made a guess at the possible equivalency)

The Effect of Poverty on State Test Performance

All Louisiana school districts struggle with the adverse effects of student poverty on academic performance
The following chart ranks the school districts in Louisiana according to overall student performance on the 1018 LEAP and end of course tests. Note that even the wealthiest school district (The Central Community School District) has 37.5% of its students who were classified as economically disadvantaged. (This is based on the percentage of students who qualify for free or reduced lunch) I have divided the ranking of districts into 4 groups based upon approximately 10 percentage point changes in performance on state tests. The average performance and the average poverty rates are listed at the bottom of each group. The top two performing groups are the following: (Click on the figure to enlarge it) 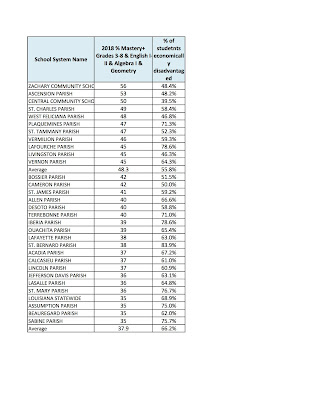 The highest performing school systems in Louisiana, unfortunately, have an average of 55.8% of their students who are economically disadvantaged as determined by free lunch eligibility. Only 48.3% of the students in the top performing group of school systems achieved a score of Mastery or above on their state tests. Note: Be aware also that the Louisiana raw cut scores are set so low, that mastery performance on some tests could mean that as low as only 39% of the questions on the test were answered correctly.

Just a few school systems score well despite fairly high poverty
It looks like two school systems (Lafourche and Paquemines) in the top performing group, achieved relatively high test performance despite the fact that they had over 70% of their students classified as economically disadvantaged. The effectiveness of teachers in those two districts may be significantly improving test scores in such moderately high poverty districts. There may also be other, more positive socio-economic factors such as stronger family units and better role models in such districts which could also boost scores. This could be an interesting area for further study by social scientists.
School districts with extreme poverty have seemingly unsurmountable obstacles to academic achievement
The following is a ranking of the lowest two performing groups of school systems: (Click on the figure to enlarge it) 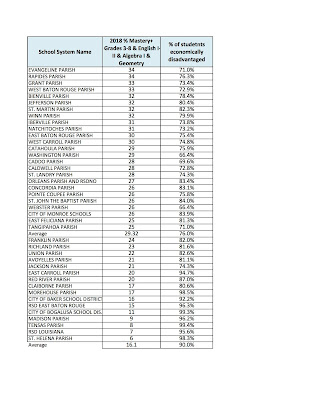 Now take a look at the lowest performing group of school systems on the chart above, and note the extremely high average percentage of students (90%) who are classified as economically disadvantaged. Note also that only 16% of their students achieved a score of Mastery or above on the state tests.

It seems that when a school system gets to the 90% poverty level, its student test performance plummets to extremely low levels. Apparently, teacher effectiveness is not overcoming the extreme effects of poverty on test performance.

These data demonstrate why it is unfair to grade schools based on student test scores. The American Statistical Association tells us that the expertise of teachers in schools has only about 10% effect on the average performance of students. The data for Louisiana shows that year after year, the school systems with the highest percentage of students who are economically deprived score consistently in the bottom quartile of the rankings and consequently their schools are labeled as D or F. Generally we can predict the letter grade of a school based purely on the percentage of students who are economically disadvantaged. So what is the purpose of repeatedly listing such schools as failing schools? Does anyone still believe that the teachers in schools serving a large percentage of economically disadvantaged students are not competent or dedicated?


There are several factors other than poverty that also affect the performance of students on state tests, but they are not as big a factor as poverty. According to the data released by the LDOE, students that are English language learners have the lowest average performance, but these students also usually attend schools in high poverty school zones.

Vouchers have not provided solutions
For years we have heard from education reformers that we have to free students trapped in failing schools by allowing them to transfer to private schools. Well that experiment has now been tried in Louisiana for several years by allowing vouchers for such students to attend private schools. But the Research Alliance of New Orleans from Tulane University has found that such voucher students perform at an equal or lower level after they make their escape from public schools.

The relatively high average percentage of students who are economically disadvantaged in even the highest rated public systems in Louisiana demonstrates why Louisiana as a whole does not produce anywhere near the test score average of states with much fewer students living in poverty.  Massachusetts, for example has 32% of their students, statewide, who are economically disadvantaged. This is significantly less than the 56% of students with economic disadvantage for the highest performing group of Louisiana school districts.

Louisiana is not alone in the effects of poverty in student test performance. States like New Mexico, Mississippi, and Alabama are fighting the same battle with their national test score rankings. It just does not make sense to blame the teachers and schools for such strong socio-economic effects. Constantly blaming and shaming schools does nothing for the students affected by poverty.

Maybe what we need instead of school reform is for our society to deal more effectively with reducing poverty!