The new school grading system is very complex, requires many arcane calculations, and promotes the myth that schools are being rated in a fair manner.  Unfortunately the new school rating system amounts to a useless Rube-Goldberg ratings machine resulting in continued stigmatization of schools serving disadvantaged student populations. It operates with several serious flaws. (See the analysis below by Herb Bassett.) The school grading system tells us what we already knew without having to go through these complex calculations. That is that schools with high percentages of economically disadvantaged students and students with disabilities produce lower test score averages year after year. Also schools that select their students by high academic ability and economic advantage produce higher average test scores year after year.

But when we look at the extremely detailed formula for assigning grades to schools, it seems to include almost everything but the factors that really matter. The addition of progress points changes little in the final result. It is my opinion that schools with high percentages of  disadvantaged students are just as handicapped in winning progress points as they are in attaining high average test scores.  All children can make academic progress but at different rates according to their varying environments and talents.

We know that acedemically selective magnet schools will always get high performance scores and an "A" letter grade almost without regard to the quality of instruction. That's because students selected based on good academic performance in the past will generally produce high test scores in the near future.

We also know that lab schools that admit mostly wealthy students will produce high average test scores and will also get rated as high performing schools.

Simply noting the designation "magnet" or "alternative" in the SPS tables has no effect on the calculation of the scores.

The correlation of poverty and school scores in the new grading system could be observed by including a column listing the percentage of students in the school who are economically disadvantaged in addition to the "magnet" or "alternative" designations. But our LDOE has always failed to include the economic data next to the school ratings. Here is a sample of such data for the Natchitoches Parish school system: (Click on chart to enlarge it) 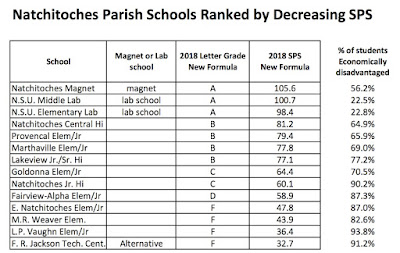 The 3 "A" schools in Natchitoches Parish don't just happen to be magnet and lab schools.  The 4 "F" schools include one alternative school and three schools that serve some of the most impoverished students in the school system. Student selection profoundly affects the school scores and letter grades. (Note: high poverty populations do have some high performing students. These are often siphoned off to magnet schools, further depressing the score of their original school)

It is not my intention to unfairly spotlight the Natchitoches School system. The same trends can be observed in any of the public school systems in Louisiana.  In addition, the school systems that have the highest district grades are invariably those with the lowest levels of poverty. The LDOE conveniently fails to provide the data to allow the public to make this comparison.

So what is the purpose of reporting to the public that such schools repeatedly have low average test performance? How does it help to add insult to injury for struggling schools? How does it help a school to attract good teachers when it is repeatedly rated as a "D" or an "F" no matter how hard the teachers work? If the ultimate goal is to help students perform better, then it must be obvious that the school rating system is counter productive.

This grading system continues to perpetrate the myth that "A" rated schools have the best teachers and the "F" rated schools have the worst teachers. A great way to destroy this myth would be to switch the teachers from an "A" rated school with the teachers from an "F" rated school for a few years. I would be willing to make a sizable waver that there would be little change in the performance of either school. But to my knowledge, this has never been done. Why do we continue to perpetuate the myth that school performance is mostly determined by the quality of the teachers when we have so much evidence that there are much more powerful factors at work?

But Superintendent White and his allies are irrevocably committed to the rating, blaming and shaming of schools for factors over which they have no control. The facts don't matter. The only thing that matters is the mistaken ideology that such tactics will somehow produce improved results.

We have shown in this earlier report that the LEAP test results have been inflated in recent years to give the illusion of progress, but this report shows that Louisiana is falling further behind on the Nation Assessment of Education progress which compares Louisiana to all other states.

In Louisiana, this policy along with the imposition of the unteachable Common Core standards have only resulted in a lower ranking compared to other states on the National Assessment of Educational Progress.

Thank you for providing such an informative content. I like the way you publish such an useful post which may help many needful.
Tutor Jobs in Delhi | Home Tutors in Delhi

yanmaneee said...
This comment has been removed by a blog administrator.
November 4, 2019 at 2:53 AM

SELECTIVE SCHOOL TUTORING said...
This comment has been removed by a blog administrator.
January 1, 2020 at 10:44 PM